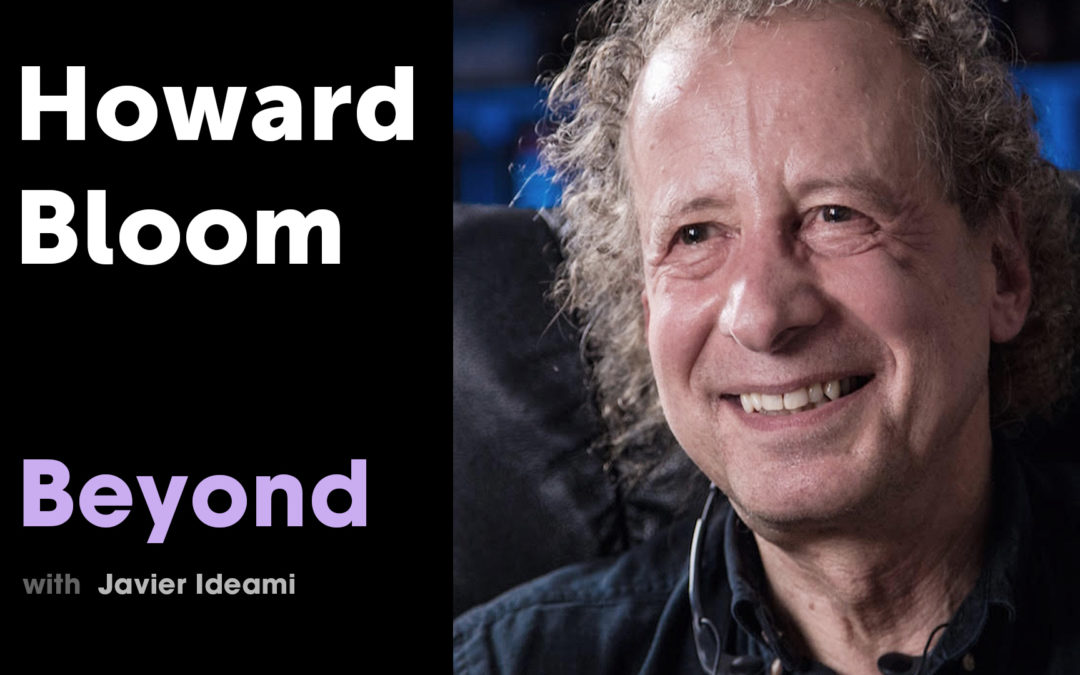 Michael Jackson and the two laws of science:
Howard Bloom is a multidimensional explorer. He was the music publicist for stars like Michael Jackson, Prince, Billy Joel, Bob Marley and many more. He’s been called “next in a line of seminal thinkers that includes Newton, Darwin, Einstein, Freud, and Buckminster Fuller” by Britain’s Channel4 TV and “the next Stephen Hawking” by Gear Magazine. Author of seven books, Bloom’s career and explorations combine cosmology, theoretical physics, microbiology, business, popular culture and much more.

OUTLINE:
03:20 – Beginnings, Howard’s childhood.
04:51 – The first two laws of science: The truth at any price (the law of courage) / Looking at things right under your nose as if you have never seen them before (the law of awe, wonder, curiosity and surprise).
05:56 – First time meeting Michael Jackson.
08:50 – Einstein, relativity and the beginning of a writing career: writing deliciously.
10:26 – College times, NYU, Literary magazine editor / experimental graphics and literary magazine.
12:41 – Michael Jackson and the law of awe, wonder and surprise.
15:10 – William Blake / a world in a grain of sand – infinity in an hour – Michael Jackson seeing infinity in the tiniest things.
15:22 – Emergency, Michael Jackson about to cancel his Victory Tour.
19:12 – Bad press and the critics.
20:19 – In search of producing awe, wonder and surprise.
20:55 – Howard’s vision.
21:19 – Convincing Michael Jackson to continue the tour.
24:39 – Absolute commitment to his audience, courage above all.
25:27 – Michael Jackson vs other stars.
26:54 – Atheism and Galileo Galilei, turning the lens up (great example of the first law of science – courage)
30:10 – Antonie van leeuwenhoek, inventor of the microscope: from importing fabrics to turning the lens in other directions, towards the tiny things (great example of the second law of science – awe, wonder and surprise)
31:14 – Gods in Howard’s parents, gods in passion, gods inside, gods within, turning the lens within; in search of the ecstatic experience.
33:01 – Finding the ecstatic experience at 15 years old: the Black Orpheus movie, Macumba rituals in south america.
33:32 – The variety of the religious experience, a Study in Human Nature, book by psychologist and philosopher William James: ecstatic experiences, out of body experiences in the hands of the right person can become an engine of history.
34:58 – Go Tell It on the Mountain, novel by James Baldwin, description of an ecstatic experience.
35:30 – Howard’s ecstatic out of body experience at 16 years old during highschool; undertanding performers and their role in the lives of their audiences (the gods inside of them).
40:25 – John mellencamp, Eric Clapton – the pain of getting off stage after an ecstatic experience.
43:17 – Movies that touch you, putting you in a different state, returning to your normal state after a while. For performers, this process can be way longer.
45:29 – What Michael Jackson did before performances to prepare facing huge audiences.
46:15 – Michael Jackson performances – why they were so unique; a mixture of control, mastery and performing every time as if it was the first time.
47:35 – Michael Jackson’s invention in the world of dance – dominant hand gestures vs submissive hand gestures.
50:22 – The one white glove of Michael Jackson.
50:34 – P.T Barnum (Phineas Taylor Barnum) and the brick patterns; creating awe, wonder and surprise; One white glove vs two white gloves; bringing attention to a gesture unique to black culture; going beyond race. A plane of awe, wonder and surprise where race doesn’t matter at all.
52:37 – Michael Jackson, total commitment, exceeding his own studio performances; self consciousness and criticism.
54:18 – Jackie Wilson and James Brown: giving it all in each performance; possessed by soul (the gods inside) and control (capacity to channel those gods to provide astonishment).
55:34 – The agony of Michael Jackson – the negative stories.
57:20 – Dark forces around Michael, 300 death threats a day.
58:24 – Chased by Paparazzi and distorsions by the press.
01:02:41 – What Michael Jackson represented to the press and others.
01:03:19 – The Boston Herald, the Boston Globe and the cover of Michael Jackson.
01:04:44 – A Michael Jackson story every day – the selling power of negative stories; “If It Bleeds, It Leads”: awful stuff outsells good stuff.
01:06:05 – Billy Joel and the accident; taking advantage of celebrities.
01:09:00 – Childhood deprivation – research on mice and Michael’s behaviour.
01:10:33 – The temptation to sue Michael Jackson; hitting the jackpot.
01:11:49 – The selling power of sex related headlines.
01:12:25 – The allegations and the Living Neverland documentary.
01:14:03 – Implanted memories – Elizabeth F. Loftus, cognitive psychologist and expert on human memory – experiments in manipulated and manufactured memories.
01:16:48 – 1954 – The roger banister effect and the 4 minute mile. The impossible becomes possible; expanding the boundaries of human possibility.
01:20:40 – The death of Michael Jackson. Could it have been prevented?
01:21:32 – The final tour, Propofol, ecstatic experiences in every rehearsal, drugs and the unbearable existence.
01:22:19 – Losing Michael.
01:24:28 – Anthropologist Robin Fox; Participant Observer science: throwing yourself into the experience; example: Margaret Mead in Samoa: absorbing everything deeply.
01:26:14 – Science and popular culture, total connection.
01:30:05 – Doing things as if it was the first time.
01:30:55 – Renascence by Edna St. Vincent Millay – experiencing the full range of human emotions to see the infinite in the tiniest things.
01:31:29 – The Love Song of J. Alfred Prufrock by T. S. Eliot: becoming who you are now.
01:33:02 – Conclusion